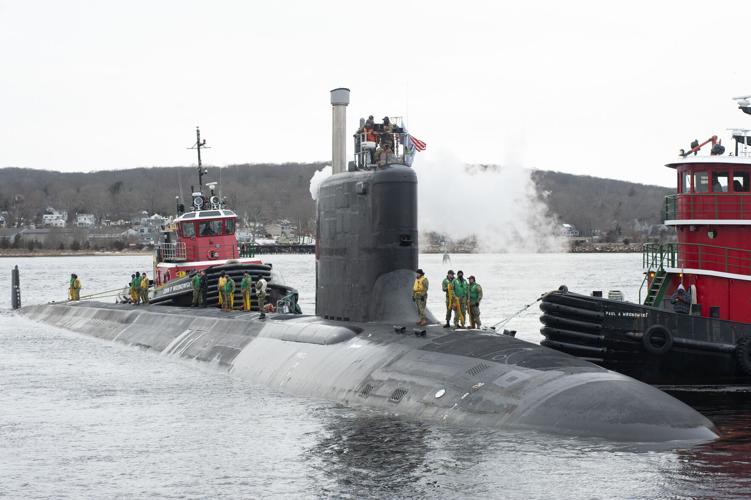 The USS Oregon pulls into Submarine Base New London in Groton, Connecticut on March 1, 2022 for the first time. The submarine was delivered to the U.S. Navy on Saturday, Feb. 26. (U.S. Navy Photo by John Narewski) 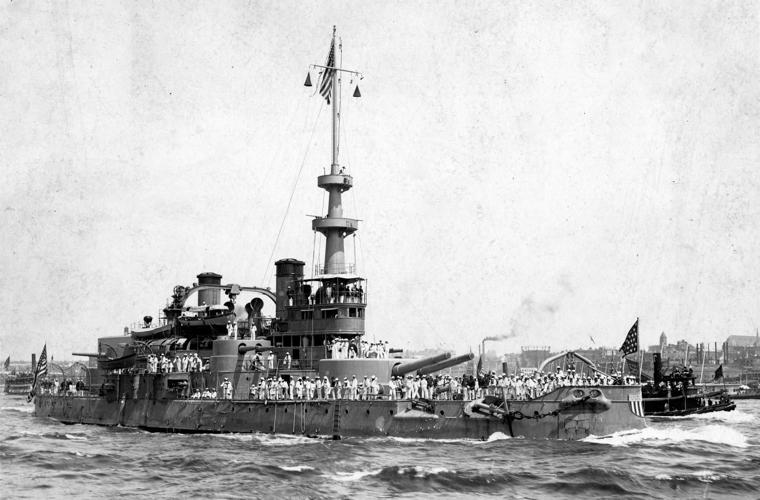 The crew of the USS Oregon line the railings as the battleship steams along at sea in the late 1890s. (Navy/Submitted photo) 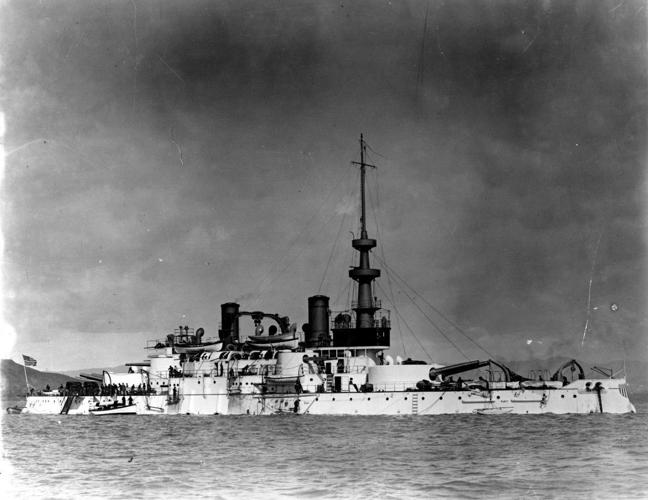 The USS Oregon, the third battleship of the US Navy, launched in 1893 and commissioned in 1896. It took part in the Spanish-American War in 1898. 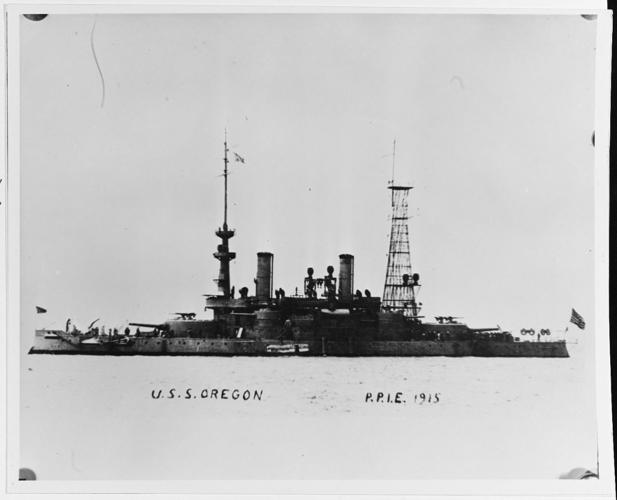 The battleship USS Oregon, launched in 1893, at seaSource: US Navy 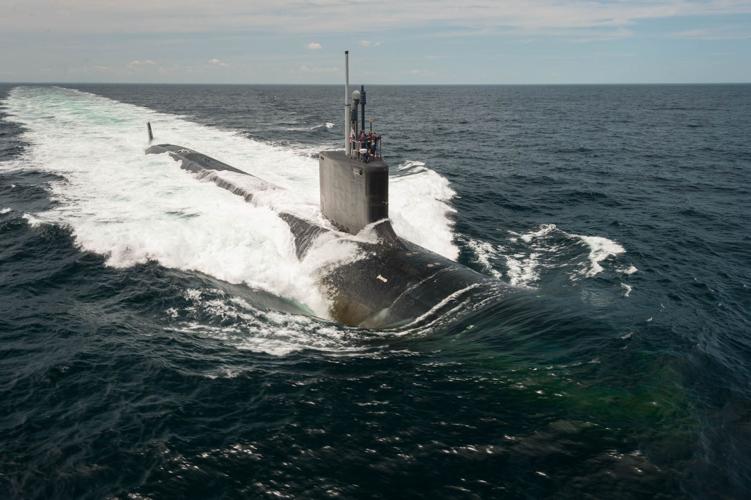 The Oregon Secretary of State is already preparing "submarine ballots" for sailors and others who can't vote under regular deadlines.

The USS Oregon pulls into Submarine Base New London in Groton, Connecticut on March 1, 2022 for the first time. The submarine was delivered to the U.S. Navy on Saturday, Feb. 26. (U.S. Navy Photo by John Narewski)

The battleship USS Oregon, launched in 1893, at seaSource: US Navy

A new USS Oregon officially joined the U.S Navy on Saturday morning during commission ceremonies at Submarine Base New London in Groton, Connecticut.

The Navy put the ceremonial commissioning of ships on hold for two years because of the COVID-19 pandemic and only recently resumed the tradition.

The nuclear-powered fast attack submarine is the first U.S. Navy ship to carry the state's name since 1893, when the battleship USS Oregon was launched.

The Virginia-class submarine was built at an estimated price tag of just under $3 billion by Groton-based General Dynamics Electric Boat Co. After its launch and sea trials, the commissioning marks the official beginning of its U.S. Navy service.

Each Virginia-class submarine has had an official sponsor, a woman with a connection to the vessel's namesake state. Their role is to bring good luck to the submarine and crew, with duties including breaking a bottle of champagne over the hull of the submarine and giving the first order after a commissioning.

While still in the White House, First Lady Laura Bush sponsored the USS Texas and First Lady Michelle Obama carried the role for the USS Illinois.

In April, First Lady Jill Biden was the sponsor of the USS Delaware, also a Virginia-class submarine.

During a commissioning commemoration, she called out “Officers and crew of the USS Delaware, man our ship and bring her to life.” The crew responded, “Aye aye, ma’am" and swiftly boarded in dress uniform.

The sponsor of the commissioning of the USS Oregon is Dana Richardson of Corvallis, the wife of Admiral John Richardson, the former Chief of Naval Operations John Richardson.

The USS Oregon commissioning was the first traditional ceremony since 2019, before the COVID-19 pandemic hit the United States. Two Virginia-class submarines — the USS Delaware and USS Vermont — were commissioned to join the Navy and public commemorations occurred later.

The USS Oregon has four torpedo tubes to fire Mk-48 torpedoes that move at 50 mph. Unlike older torpedoes that exploded when the tip struck a submarine or ship, the Mk-48 has advanced proximity fuses to detonate with maximum explosive force.

When fired at surface ships, the Mk-48 torpedo dives under the hull and detonates at the keel, the blast breaking the back of the ship.

The USS Oregon has a quiver of variety when it comes to weaponry. It can fire surface-skimming Harpoon anti-ship missiles, a weapon that is now reaching Ukrainian coastal defense troops fighting Russia's attempt to bottle up the port of Odesa.

The submarine also is equipped with BGM-109 Tomahawk cruise missiles that can reach targets on land up to 1,500 miles away. It can carry conventional and nuclear warheads.

The submarine will move through the water powered by pump-jet propulsion instead of traditional screws with blades — reducing the amount of bubbles and noise — called cavitation — that can be heard on sonar.

The submarine's S9G nuclear reactor gives the USS Oregon a top speed of 25 knots submerged. Its reactor will run for about 30 years without any additional fuel. The nuclear power gives the submarine virtually unlimited range and the ability to stay submerged for up to three months.

The Navy has commissioned 19 Virginia-class submarines — the USS Oregon is the 20th. Eight more are under construction, including what would become the USS Idaho.

Vice Admiral Michael J. Connor told Congress in 2015 that the USS Oregon and its sister boats were “game-changers” in maintaining a balance of power with Russia and China.

“The undersea arena is the most opaque of all warfighting domains,” Connor said. “It is easier to track a small object in space than it is to track a large submarine, with tremendous firepower, under the water.”

The commissioning of the USS Oregon this weekend ends a long gap in U.S. Navy history without a ship named for the state.

USS Oregon — pride of the fleet, then obsolete

The first USS Oregon was a brigantine purchased in 1842 from a private owner to be used as an exploring ship until 1849.

The Confederacy seized a privately owned steamwheeler mail boat during the Civil War and converted it into blockage runner christened CSS Oregon. It was scuttled and burned by its crew as Union forces closed in on New Orleans in April 1863.

By 1889, the Navy had adopted a tradition of naming battleships after states.

In 1893, the USS Oregon was launched at a cost $4 million — about $115 million in today’s dollars. The nation's third battleship, it was 351 feet long — 26 feet shorter than the USS Oregon submarine.  It was the first American warship named for the 33rd state.

More than 20,000 people came to the Union Iron Works shipyard on Mare Island to watch the ship slide into San Francisco Bay.

“The Oregon In Her Element” said a wire report headline in the New York Times.

The battleship's four coal-fired boilers could push the ship to a top speed of 15 knots with a range of 4,900 nautical miles before requiring refueling. It was nicknamed “Bulldog of the Navy” for the way its bow thrashed through open seas.

In 1898, the USS Oregon made headlines by steaming more than 15,700 miles from San Francisco, around South America's Cape Horn, to Florida — arriving 66 days after it left, just as the Spanish-American War broke out.

At the Battle of Santiago de Cuba, the USS Oregon cornered a Spanish cruiser and ordered it to run aground and surrender. The New York Herald newspaper published a poem about the battleship on its front page.

But battleship design was evolving so rapidly that less than 10 years after it was commissioned, the USS Oregon was obsolete — too slow, too lightly protected, and carrying too many small-caliber guns.

It would be suicide for the ship to go blow-to-blow with the new type of dreadnaughts that began to appear in 1906. Featuring all large-caliber, long-range guns in turrets mounted on the deck, their thicker armor plating made it easier to absorb hits from the biggest guns of opponents.

Reduced to a ceremonial role, the USS Oregon was decommissioned in 1919 and docked on the Portland waterfront for tourists to see. When World War II came along, the old ship was pressed into the fight, as scrap metal. Struck from the Naval Vessel Register, the hull became IX-22, an “unclassified miscellaneous vessel.”

The husk of the battleship did get into the war zone, as an ammunition barge towed across the Pacific for the battle of Guam. American troops abandoned it there and the last remnants were sold for scrap by a Japanese company in 1956.

The USS Oregon's mast and bow shield were preserved and used in 1956 to create the Battleship Oregon Memorial in what is now Tom McCall Waterfront Park in Portland. It's frequently used as a meeting point for downtown demonstrations.

No battleships put Navy in a bind

The USS Missouri was the last battleship commissioned in the U.S. Navy, one of four Iowa-class battleships ordered and being built at the time of Pearl Harbor. Commissioned in June 1944, its most historic role was as the site of the Japanese surrender in Tokyo Bay in September 1945.

After World War II, no more battleships were built, putting the Navy in a political bind.

Naming a battleship after a state was political prestige for members of Congress, who voted on the Navy's budget.

In the 1960s, the Navy named six guided-missile cruisers after states.

Attack submarines had traditionally been named after sea creatures — the Tang, Snook, Seahorse and Wahoo were among the top submarines to sink Japanese shipping during World War II.

But pressure mounted to name attack submarines after major cities, then states. Submariners didn't like the switches, but Admiral Hyman Rickover, the father of the nuclear-powered Navy, once observed, tradition and political expediency don't always match.

"I guess I'm a traditionalist — I think submarines should be named after fish,'' Retired Navy Capt. William F. McGonagle told the New York Times in 1996.''But as Admiral Rickover said, 'fish don't vote.'''

When the new Seawolf-class fast-attack submarine was introduced to the fleet, one was named USS Connecticut. Since the introduction of the Virginia-class submarines, nearly all have been named for states.

In 2011, Sen. Jeff Merkley, D-Oregon, inquired about naming a ship after Oregon. A constituent's letter had noted a long gap in having a USS Oregon in the fleet.

Merkley wrote a letter to then-Navy Secretary Ray Mabus asking him to put Oregon near the top of the queue for submarine naming.

“It would be a great honor to the sailors, marines, military service members as well as citizens of Oregon to have one of the newest naval submarines named in their honor,” Merkley wrote.

In October 2014, Mabus came to the Battleship Oregon Memorial in Portland to announce that a fast-attack submarine with hull number SSN-793 would be named the USS Oregon.

The Navy plans on keeping the new USS Oregon much longer than its predecessor's namesake. The Navy forecast the USS Oregon will be in service until at least the mid-2050s.