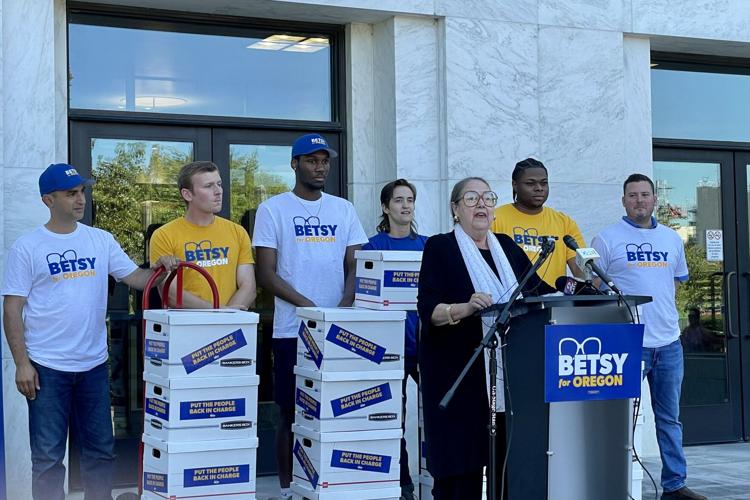 Unaffiliated candidate for governor Betsy Johnson makes remarks in front of the Public Services Building in Salem on Aug. 16 as she delivers boxes of petitions to qualify for the Nov. 8 election. 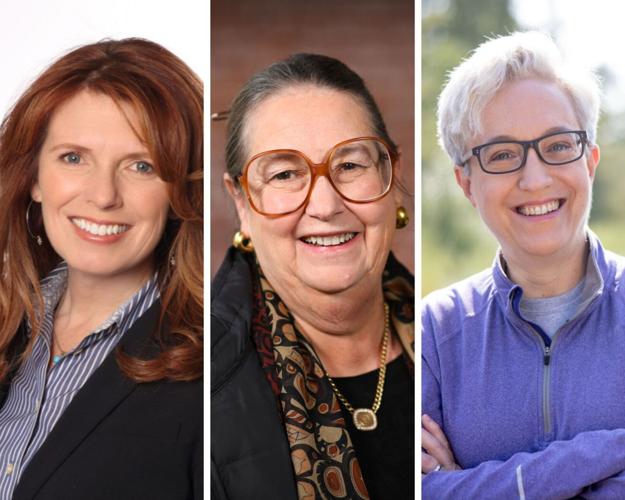 Unaffiliated candidate for governor Betsy Johnson makes remarks in front of the Public Services Building in Salem on Aug. 16 as she delivers boxes of petitions to qualify for the Nov. 8 election.

Former Sen. Betsy Johnson said Tuesday she had submitted more than twice the number of signatures needed to qualify for the Nov. 8 general election ballot as a non-affiliated candidate for governor.

Campaign workers wheeled boxes with what Johnson said were petitions with 48,214 signatures into the office of Secretary of State Shemia Fagan in Salem.

Johnson needs to have 23,744 valid signatures on the petitions. Fagan had set Tuesday as the last day Johnson could submit petitions with enough time for election staff to verify signatures before the Aug. 30 deadline to add Johnson to the ballot.

“Coming onto the ballot through the power of people’s signatures is one of the most meaningful, and foundational, elements of my campaign,” Johnson said in brief remarks at the petition drop-off.

If Johnson hits the mark, it will set off a rare three-way race of major candidates for governor. With Gov. Kate Brown barred from running again by term limits, it's the first race for the state's top office without an incumbent or former governor on the ballot since 2002.

A pair of recent antagonists in the House won their parties' primaries on May 17. Former House Speaker Tina Kotek of Portland is the Democratic nominee. Former House Minority Leader Christine Drazan of Canby is the Republican contender

Oregon has elected just one governor since statehood in 1849 not affiliated with a major party. Julius Meier, an independent, was elected to one term in 1930.

Johnson was born in Bend and grew up in Redmond. Her father, Sam Johnson, was a longtime timber businessman who served in the state House and as mayor of Redmond as a Republican.

But Betsy Johnson moved west of the Cascades to run an aviation business with her husband, John Helm, and at one time directed aviation services for the Oregon Department of Transportation.

In 2000, she began more than two decades in the Legislature representing the Oregon Coast as a Democrat.

Johnson's mix of politics — including support for abortion rights and opposition to strict gun controls — was often expressed with an acerbic exuberance that chafed leaders of both parties.

In October, Johnson announced that she would step down from the Senate and quit the Democratic Party to run as an unaffiliated candidate for governor.

Johnson raced out to an early commanding lead in fundraising, and as of Tuesday had banked $10.25 million in donations, with large amounts coming from timber and construction industries. Nike founder Phil Knight has given $1.75 million to date. Johnson has $4.6 million in the bank and has taken the full legally allowed 30 days to report new contributions and spending.

Since the field of 34 Democrats and Republicans seeking the governorship was winnowed to Kotek and Drazan, the major party pair have cut the funding distance.

Drazan has raised $6.1 million, while Kotek has brought in $6 million. Heavy spending, including in the primaries, has Kotek with $1.3 million in the bank and Drazan at about $500,000.

The Republican Governors Association has given Drazan $1.56 million, while Roseburg-based forest products company Swanson Group has given $375,000. She's received other large donations from business and conservative interests.

Kotek has received over $878,000 for the Democratic Governors Association, and large donations from labor and liberal activist groups, including $315,000 from Citizens Action for Political Education, a campaign fund of the SEIU public employee union.

Both Kotek and Drazan have reported new contributions and spending within less than a week of transactions.

Johnson has portrayed herself as a political moderate running against two polar opposites on the political spectrum.

“To Tina I’m too conservative and to Christine I’m too liberal," Johnson said during the first candidates' debate in late July.

Drazan and Kotek have sought to push Johnson toward the other, a theme that continued after Johnson's remarks Tuesday.

Drazan's campaign welcomed a "second Democrat' to the race, pairing Johnson with Kotek.

“If you are happy with the way things are going in our state, then you have two great choices in these candidates," said Drazan campaign manager Trey Rosser in a statement. "Either one will give you a third term of Kate Brown’s failed agenda."

Kotek's campaign said key votes were more an indicator of political leanings than whether Johnson had a D or R behind her name while in office.

“During her more than 20-year career in the legislature, Betsy Johnson voted against raising the minimum wage, opposed bills protecting Oregon's clean air and water, and earned an 'A' rating from the NRA," said Kotek spokesperson Katie Wertheimer.  "She’s deeply out of touch with most Oregonians.”

State law allows anyone who is an active registered voter in Oregon to sign a petition to put a non-affiliated candidate onto the ballot. It doesn't matter which political party, if any, they are registered with.

Elections Division staff will pull a random sample of petitions and use state voter records and in some cases, handwriting analysis, to examine signatures.

Ben Morris, communications director for the Secretary of State said Tuesday that the office did not have an estimate yet on when the process might be completed.