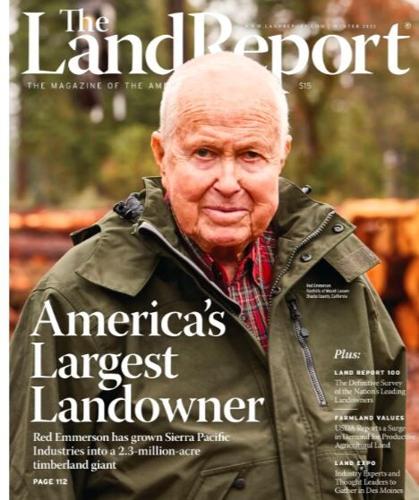 Red Emmerson of Redding, Calif., was featured as America's largest landowner in the Winter issue of Land Report. His company, Sierra Pacific Industries, has recently given major contributions to campaigns against Democratic Party's control of Oregon politics. 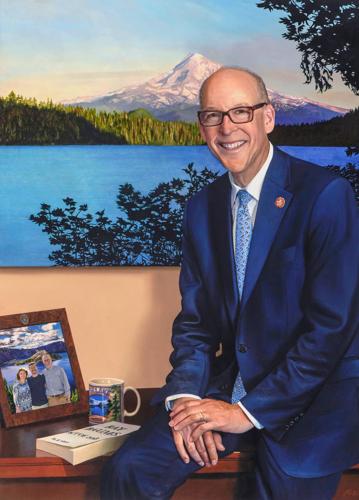 A portrait of former U.S. Rep. Greg Walde, R-Hood River, by artist John Friedman was recently unveiled in the U.S. Capitol. Walden has been hired by a PAC led by timber and construction firms to consult on a 2022 effort to curtail Democratic power in Oregon state government. 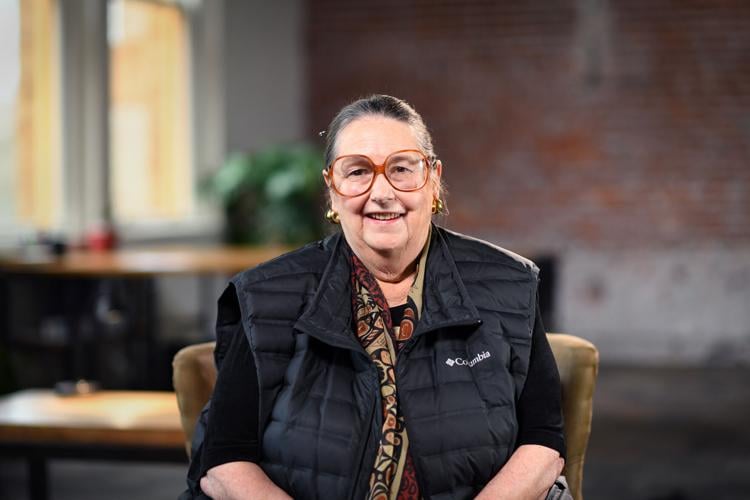 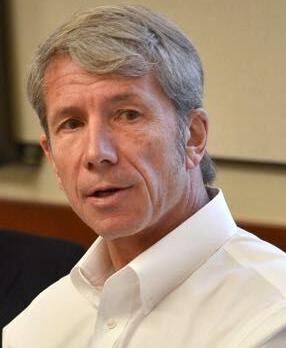 U.S. Rep. Kurt Schrader, D-Canby, has received campaign support from a California family that is the nation's largest landowner. The Emmerson family of Redding is involved in new efforts to curtail Democratic control in Oregon state politics.

Red Emmerson of Redding, Calif., was featured as America's largest landowner in the Winter issue of Land Report. His company, Sierra Pacific Industries, has recently given major contributions to campaigns against Democratic Party's control of Oregon politics.

A portrait of former U.S. Rep. Greg Walde, R-Hood River, by artist John Friedman was recently unveiled in the U.S. Capitol. Walden has been hired by a PAC led by timber and construction firms to consult on a 2022 effort to curtail Democratic power in Oregon state government.

A California timber baron who is the nation's largest landowner has jumped into Oregon politics with big contributions to campaigns seeking to wrest control of state government from Democrats.

Sierra Pacific Industries contributed $200,000 on April 4 to Betsy Johnson, the former Democratic state senator from Scappoose, who is running as an unaffiliated candidate for governor. It's the third largest single contribution that makes up the more than $6.2 million Johnson has raised since the beginning of January 2021.

The company also gave $250,000 in February to Bring Balance to Salem, a political action committee formed late last year that has raised $1.6 million. The contributions have come primarily in large sums given by timber, construction and other companies.

Sierra Pacific is one of the four largest single givers, along with Oregon-based wood products companies The Swanson Group, Roseburg Forest Products, and Murphy Company. The PAC has hired former U.S. Rep. Greg Walden, R-Hood River, as a consultant.

Oregon is one of five states that has no limits on the amount of contributions from individuals, companies, unions, groups or other entities. An exception: contributions to congressional campaigns are controlled by the Federal Elections Commission.

Sierra Pacific Industries is owned by Archie Aldis "Red" Emmerson, 93, who lives in Redding, Calif. The company's total land holdings are 2.3 million acres in California, Washington and Oregon, according to The Land Report, a Dallas-based magazine covering property ownership.

The magazine's Winter 2021 issue reported Emmerson topped the list of the largest landowners in the United States. He moved up from third place following the October 2021 purchase of Eugene-based Seneca Sawmill Co. The deal included 175,000 acres of timberlands in southwestern Oregon, the magazine reported.

Born in Grand Ronde, Oregon, Emmerson went to high school in Omak in Eastern Washington before moving to California and working in the timber and sawmill industry, eventually joining his late father, Curly Emmerson, to found Sierra Pacific in 1949.

Democrats currently control the governorship, both chambers of the Legislature, secretary of state, treasurer, attorney general, both U.S. senators and four of five seats in Oregon's delegation to the U.S. House.

Johnson is seeking to become the first non-Democrat elected governor since Vic Atiyeh in 1982.

Bring Balance to Salem has only spent just over $15,000 so far — with $10,000 going to Hood River-based Walden Consulting. The firm is listed in December 2021 as being run by Walden and his wife, Mylene Simons-Walden, according to business records filed with the Oregon Secretary of State.

The former congressman's sister-in-law, Marta Simons, also of Hood River, is listed as the group's treasurer. She earlier served as treasurer for Walden's Victory Fund PAC during his time in Congress.

The PAC lists its address as 25 NW 23rd Place, Suite 6 Box 133 in Portland. The address is for Postal Annex+, an outlet of the commercial maildrop chain.

Sierra Pacific is moving into its third generation of family ownership. According to Federal Elections Commission records, Red Emmerson is now officially the chairman emeritus. His sons, George and Mark, serve as company president and chairman/chief financial officer, respectively.

Emmerson's daughter, Carolyn Dietz, is president of the company's philanthropic Sierra Pacific Foundation, according to the foundation's website.

Red, George and Mark Emmerson have all given frequently to Republican, timber industry and other political actions committees, according to the FEC. Red Emmerson gave to the successful presidential campaigns of George W. Bush in 2000 and 2004. He also gave to John McCain and Mitt Romney. the Republican nominees in 2008 and 2012 who both lost to President Barack Obama.

All three contributed to Donald Trump, the Republican who won the presidency in 2016 and lost to President Joe Biden in 2020.

Mark and George Emmerson have contributed to campaigns of U.S. Rep. Kurt Schrader, D-Canby. Both have contributed to Schrader's 2022 re-election, when he is facing a primary challenge from Jaime McLeod-Skinner of Terrebonne. Schrader has also received contributions from Andrea Howell, Sierra Pacific's corporate affair director.

U.S. Rep. Cliff Bentz, R-Ontario, has received $4,000 from family members in the past two elections.

Sierra Pacific also gave $2,500 each to the campaigns of Tim Freeman and Tom Kress, who are running for different seats on the non-partisan Douglas County Commission. Eugene city council candidate Jennifer Soloman received $1,500.

Last month, Sierra Pacific lost a six-year court battle over its proposed Martis Valley West project on 670-acres on north Lake Tahoe in California, according to the Sierra Sun newspaper. Conservationists had sought to block plans for a gated community that would have included 760 vacation homes, malls and new roads.