Skip to main content
You have permission to edit this article.
Edit
Home
News
Opinion
Newsletter
Share This
1 of 5 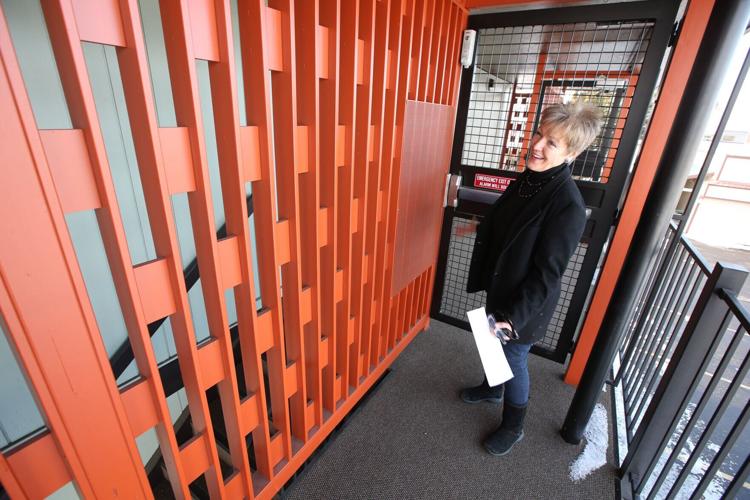 Gwenn Wysling, director of Bethlehem Inn, shows increased security at a gated entrance at a Turnkey homeless shelter in Redmond. 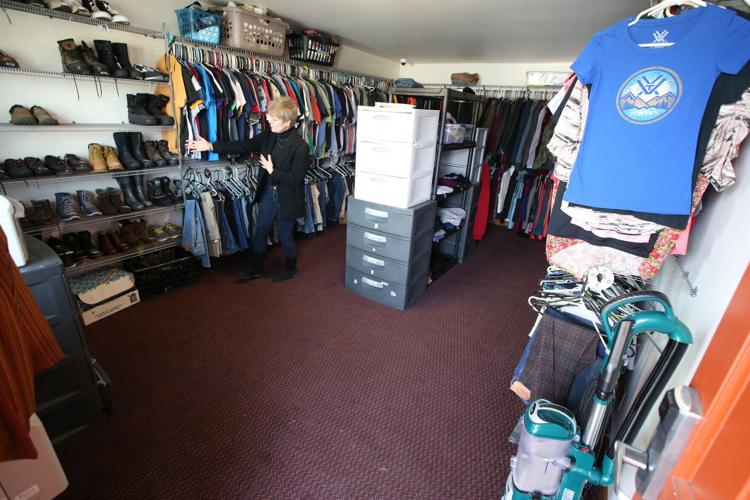 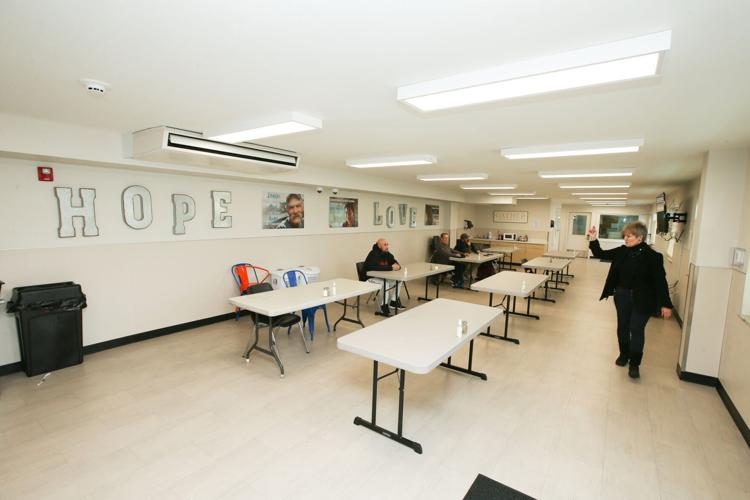 Gwenn Wysling, director of Bethlehem Inn, talks to a group of residents at a Turnkey homeless shelter in Redmond. 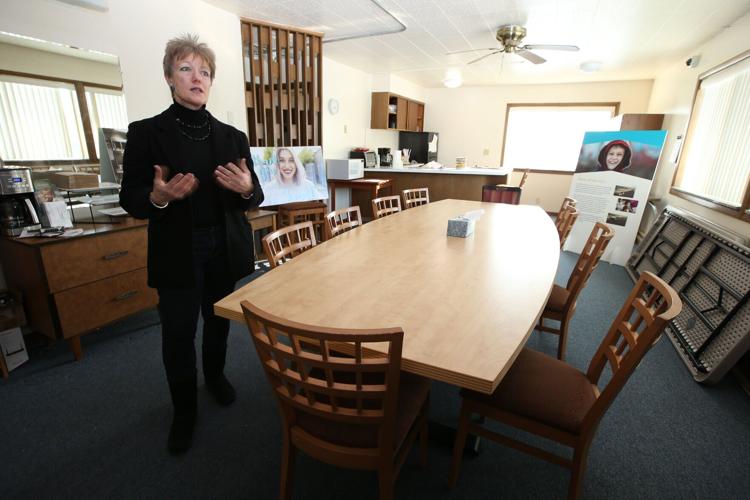 Gwenn Wysling, director of Bethlehem Inn, talks about the renovations that have been completed during a tour of a Turnkey homeless shelter in Redmond. 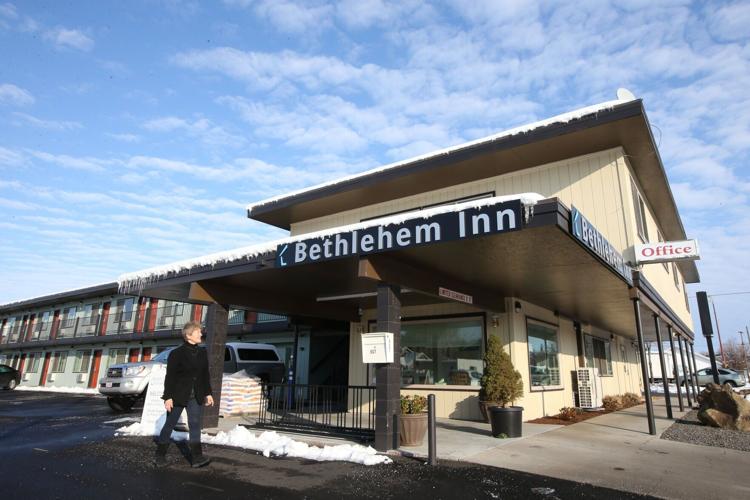 Gwenn Wysling, director of Bethlehem Inn, walks in front of a motel transformed into a homeless shelter with Turnkey funding in Redmond and looks at the new sign.

Gwenn Wysling, director of Bethlehem Inn, shows increased security at a gated entrance at a Turnkey homeless shelter in Redmond.

Gwenn Wysling, director of Bethlehem Inn, talks to a group of residents at a Turnkey homeless shelter in Redmond.

Gwenn Wysling, director of Bethlehem Inn, talks about the renovations that have been completed during a tour of a Turnkey homeless shelter in Redmond.

Gwenn Wysling, director of Bethlehem Inn, walks in front of a motel transformed into a homeless shelter with Turnkey funding in Redmond and looks at the new sign.

A handful of hotels across Oregon work a lot differently now than they did three years ago.

In 2020, state legislators committed nearly $75 million to a novel housing strategy aimed at stemming the worst impacts of both the pandemic’s first year and a destructive fire season. Two years later, recipients of that funding are looking to long-term operations while the statewide outcomes of the new services aren’t exactly clear.

The premise of the program was a simple one: The state would give local governments and nonprofits funds to purchase old hotels and motels.

They could then use those buildings as emergency shelter to house people more safely than in large congregate shelters, where disease can spread more quickly.

“In the midst of the COVID-19 pandemic, we really had to think about shelter, and sheltering people experiencing homelessness in a very different way,” said Mike Savara, who coordinates the state housing agency’s work with Project Turnkey.

“We saw shelters really trying to distance, spread out, and think about all the different ways they could limit the spread of COVID-19.”

To fund the properties, legislators enlisted the Oregon Community Foundation to dole out the funding to 19 different sites — moving the money through the private nonprofit instead of the state’s own housing agency because of the program’s urgency, state leaders said.

“You have to remember that when these funds initially came to OCF, it was at a moment when our state was dealing with a once-in-a-lifetime, we hope, pandemic and the loss of 4,000 residential structures because of the many fires that ravaged our state,” said Megan Loeb, who coordinates the Turnkey program for the foundation. “And at that moment in time, our state housing agency was dealing with their programs to really prevent people from being evicted from their home.”

In Central Oregon, the impact of those new shelters is becoming more visible.

The city of Bend, for example, purchased the old Bend Value Inn on Division Street with $2.5 million in state Turnkey funding, sheltering residents in the 28 rooms starting in January.

Those residents moved in May to the old Rainbow Motel on Franklin Avenue, which the city purchased with its own funds as a “swing space” during renovations.

Residents there will move back to Division Street when renovations are completed, hopefully in early February, according to Amy Fraley, who manages the city’s houseless services.

“The building’s going to be better and it’s going to be a place that is providing solutions,” Fraley said of the shelter, which has been named “Stepping Stone” based on public suggestions.

New beds in old buildings came with challengesAll told, Project Turnkey funded 867 shelter beds — an increase of about 20% of the state’s emergency shelter capacity, and likely the

biggest single investment in shelter space in the state’s history.

“That actually is a huge investment in our overall landscape,” Savara said.

“Oregon typically ranks in sort of the lower tiers in terms of the number of people experiencing unsheltered homelessness by capita around the state, so we absolutely need more shelter beds.”

That historic investment will only last in the long run, though, if the shelter sites keep operating at full capacity — one of the biggest challenges shelter operators are facing.

Project Turnkey funded the initial investments in shelters, allowing organizations to purchase property they likely wouldn’t have been able to without the program.

But the program didn’t fund the operational costs it would take to run the shelters, meaning those organizations have had to find ways to fold the new operations into their budgets.

In Bend, that meant an allocation of up to $900,000 from the city council for operations between May 2022 and February 2023, plus federal grants and other funding for NeighborImpact to implement the program. The city plans to use federal COVID-relief funding to operate the shelter for three years, but funding beyond that is still unknown.

“We need to have different kinds of shelter for people that is available. But how we do that over the long run is something none of us know, so that’s the piece that’s missing,” Fraley said. “The (city) council has allocated the money for three years to pay for the shelter. But we are looking for a legislative fix for that long-term operational funding as well as upkeep of the facility.”

In other parts of the state, the operational funding problem has gone even further in impacting the new shelters. The $7 million hotel purchased by Central City Concern in Northeast Portland, for example, is still only half filled, because the nonprofit can’t afford to staff the 35 rooms that currently sit empty.

The process of turning old hotels into emergency housing has also carried all kinds of renovation costs. Many shelter operators have highlighted unexpected surprises in the aging buildings and rising costs as a result of supply chain troubles.

“It’s the purpose of the shelter to support a population, so we had to do design making certain assumptions or doing very limited exploratory information,” said Garrett Kaye, a city facilities project manager for the city.

“And pretty quickly (we) discovered that some of the assumptions that we had made weren’t necessarily true, that the condition of the infrastructure hidden from view, literally under the floor, under the concrete slabs, was in pretty poor condition.”

Contractors asked the city council in August for an additional $450,000 for renovations, like fixes for sewer and gas piping discovered under the flooring and upgrades to the electrical system to accommodate for people living in the building.

In Redmond, the Bethlehem Inn shelter faced similar challenges, needing to replace the electrical system, raise the parking lot to make rooms wheelchair accessible and knock out nine rooms to replace with a kitchen and dining room.

All told, Bethlehem Inn has budgeted for about $1.75 million in renovation costs — with some funding coming from Project Turnkey but most coming from other donors — for the $2.4 million property. The city of Bend has budgeted a little over $1.5 million for the renovation of the 1950s motor lodge it purchased for $2.5 million.

Another challenge of standing up a shelter in the last few years? A limited amount of open housing to help people move into.

Salem’s Center for Hope and Safety, for example, has felt that challenge acutely. A family’s average stay at its Turnkey shelter, which focuses on families and individuals escaping domestic violence, is around 140 days because of how challenging it is to find residents a new place to move to, according to Jayne Downing, who runs the nonprofit.

The sparse data that is available about Turnkey shelters provides some insight into their impact.

The Redmond shelter, operated by Bethlehem Inn, has hosted an average of 40 residents a month since it opened, according to Wysling. Residents stay for an average of 39 days.

What “success” looks like at different shelters can mean different things — and because of a tight housing market, like what the Salem shelter experiences, it sometimes has to look like smaller wins than getting someone into long-term, permanent housing.

At Bethlehem Inn, for example, shelter staff assign each resident a score from 1 to 5 for each of seven areas: shelter, safety, employment, income, health care, mental health and overall wellness. The nonprofit’s data shows that the average resident at the shelter leaves about 4 and a quarter points higher on that scale than when they entered.

In Bend, the Turnkey-supported shelter has housed 69 individuals for an average of about 117 nights each, according to data from NeighborImpact, which operates the shelter. Of 23 who’ve left the shelter so far, a little under half have moved into some kind of more stable housing, like a subsidized rental or housing voucher, and around a quarter moved into some other kind of temporary shelter or homelessness.

“We would expect some of those folks (at the Franklin Avenue shelter) will transition to permanent housing (soon),” Fraley said. “So there has been movement in between the properties as far as people securing a more permanent housing option through some pretty robust case management and other services provided both by NeighborImpact and by REACH.”

But across the state, the outcomes of Project Turnkey are harder to measure.

While individual shelter operators might track their own data, because the funds were distributed through a private nonprofit on a short-term basis, there’s no consistent reporting across sites statewide about who is using Turnkey shelters, how long they’re staying or where they’re going when they leave.

That’s a major contrast with California’s hotel-to-shelter program launched during the pandemic. There, the state’s housing department administered the grant program and publishes data from its grantees, including dashboards of where funds are going and how many units are occupied, as well as an early analysis that showed about a third of shelter users entered permanent or temporary housing after they left the shelter.

In this state, Oregon Housing & Community Services is just beginning to fund programs at most of the Turnkey sites, which will require some data reporting to the state. OHCS has also commissioned a study on the impact of Turnkey in the near future, according to OHCS’s Savara.

More in store in new phases of pandemic

Project Turnkey isn’t over, either. Legislators in 2022 approved another $50 million for the program, which state officials expect will fund around a dozen additional shelters in early 2023.

The Oregon Community Foundation, which is also distributing the second round of grants, hasn’t disclosed which applications it plans to fund, but OCF’s Loeb says officials there hope to include regions and populations that weren’t covered in the original round.

And as the pandemic wanes, Savara, with the state housing agency, says Oregon’s Turnkey shelters are beginning to focus less on emergency shelter to prevent the transmission of COVID and pivoting to longer-term goals in a state that had 6,200 unsheltered households in 2019, according to a state study.

“At the end of the day, (homelessness is) about not having housing, and housing that’s affordable and housing that meets their needs,” Savara said. “Project Turnkey easily can start to become a great opportunity for other types of low-income, permanent housing options for people experiencing homelessness.”