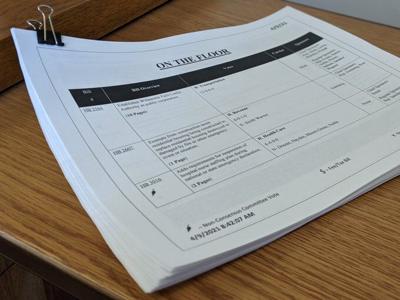 That was the question Friday as lawmakers pored over proposed maps that may show Oregon’s political future for the next decade.

The clock is ticking down until  a special session of the Legislature called by Gov. Kate Brown and beginning 8 a.m. Monday to approve a plan for political districts that reflect changes from the 2020 U.S. Census.

After months of discussions, 12 public hearings, thousands of letters and alternative plans submitted by the public, time is almost up for the Legislature to have its say on redistricting.

Democrats want to pass maps they publicly released Thursday in an after-hours email.

Republicans can opt to punt the mapmaking to the secretary of state and a special judicial panel. Otherwise their leverage as the minority party is limited.

Grounds for a consensus are currently nonexistent, though the sides continue to talk.

“Not very much has changed in the past few days,” said Rep. Shelly Boshart Davis, R-Albany, co-chair of the House Redistricting Committee.

Republicans have called the process overtly partisan, using Democratic strongholds in Portland and elsewhere to warp the district makeups to make a map that will cement Democratic hegemony.

Democrats counter that the maps reflect a reality of an Oregon in which the governor, secretary of state, treasurer, labor commissioner, both U.S. Senators and four of five members of Congress are Democrats.

The past decade has shown growth concentrated in the Bend area and around Portland, while the rural areas east of the Cascades and the Republican-leaning communities in the southwest have grown at a significantly slower pace.

Sen. Kathleen Taylor, D-Milwaukie, and Rep. Andrea Salinas, D-Lake Oswego, two of the top Democrats on the redistricting committee, said the proposed maps were fair and met state requirements, including districts that “reflect the diversity of communities of interest in our state” and other goals set out by the state’s redistricting guidelines.

“Our commitment is to Oregonians and our job is to produce fair and representative maps that reflect Oregon’s population growth, align with statutory and constitutional criteria, and ensure public participation,” they wrote.

The maps still did not have a starting point as of Friday night.

The Legislature’s official website did not include a special session until midday Friday. It shows the House and the Senate scheduled to meet on Monday at 8 a.m. But no measures, committees or  other details were to be found.

Oregon is the only state on the Pacific that does not use an independent commission to set political boundaries. California, Washington, Alaska and Hawaii have redistricting panels.

Oregon follows a more traditional plan once dominant in the United States. The Legislature draws and approves maps, which are subject to a veto of the governor.

A late as January 2020, it looked like a slam-dunk process for a state with Democratic supermajorities in the House and Senate, and Brown, a Democrat in the governor’s chair.

COVID-19, a delayed U.S. Census, a political deal in the state House, and a crossfire of claims of partisanship have made the process a mess.

The Oregon Supreme Court ruled the Legislature could try to approve a plan, but gave it a Sept. 27 deadline.

At stake is the makeup of 30 House and 60 Senate districts that must be shrunk, stretched or shifted to meet state and federal laws requiring approximately equal-sized districts.

The work is complicated this time by a sixth congressional seat awarded Oregon because of its population growth.

When Democrats released their maps on Thursday, the congressional layout was a flashpoint. The current five districts are represented by four Democrats and one Republican.

The new Democratic plan would leave the one Republican, U.S. Rep. Cliff Bentz, R-Ontario, with the bulk of Republican strongholds in the east and southwest.

Using what in political slang is called “cracking,” Democrats redrew the map to slice off portions of the Portland area to add four congressional districts. Each of the new districts was won by President Joe Biden by margins that ranged from 14.3% to 43.2%. The other district, centered around Eugene, went for Biden by 13.6%.

Barring a breakthrough no one expects, Republicans are left with two options:

Attend the special session, try to keep the plans in committee, and if that fails, put up an extended public fight with speeches and motions. But the most likely outcome is all three plans are passed and approved by Brown.

The alternative is to boycott the session, resulting in not enough lawmakers present to form a quorum to meet at all. Oregon is one of the few states that does not have a simple majority as the threshold for a quorum.

The second option would derail the legislative efforts no later than Sept. 27.

After that, the legislative maps would be drawn by Secretary of State Shemia Fagan and the congressional maps by a special panel of judges appointed by Chief Justice Martha Walters.

While Fagan has promised a fair map and wants to have a people’s commission help with the choices, Republicans expect a partisan result from Fagan, a former Democratic state senator from Portland.

Republicans would hope the judges’ panel would come up with maps that would result in a 4-2 Democratic-leaning delegation.

While an announcement could be made over the weekend, Boshart Davis said it would likely come down to Monday.

While saying she hoped the Legislature would draw the maps, that will depend on Republicans arriving at the Capitol. Will they?

“That’s a good question,” she said.

Legislation on desk in Oregon Capitol.